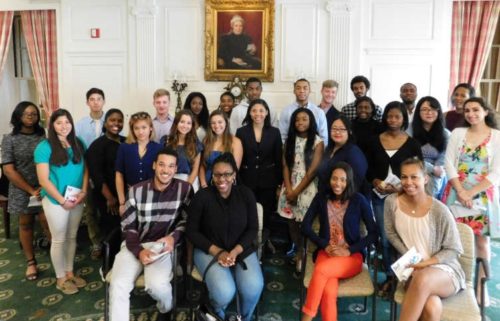 Residents of Sterling Park, The Osborn’s Independent Living community, awarded financial grants to 47 children of employees pursing higher education. This is the 15th year of the annual Academic Achievement Award presentation. It is held in June at the Resident Association Meeting.

The effort has been led by Sterling Park resident, Dr. Edward Pasciuti, a psychologist with a 40-year career as Head of the Guidance Department in New Rochelle Public Schools. “It is deeply gratifying to make gifts that help these bright young people afford the growing cost of higher education,” he said. “For many employees, this is the first family member to attend college.”

Ninety-two residents donated to the fund which is administered by The Osborn Foundation.

Students Expand Opportunities
The Academic Achievement Award program has grown to include 21 new students and 26 students who also received the grant the prior year.  The list of colleges includes many in the New York area, including several of the SUNY schools. There is also a growing number of schools across the country, including the University of Pennsylvania, Northeastern University, and the University of Notre Dame.

The student recipients addressed the Sterling Park residents during the ceremony. They   expressed gratitude for the financial award, they acknowledged the hard work of their parents, many long-time employees of The Osborn.  The Osborn and Osborn Home Care employ over 900 people.

A few of the students who had received the award for multiple years spoke eloquently about their progress through higher education. Many talked about their career goals after graduation, which ranged from finance to health care to marketing.

“One of the unique aspects of community life at The Osborn is the strong relationships that develop between residents and staff,” said President and CEO Matt Anderson. “This program is a highlight of the year for residents and employees alike.”