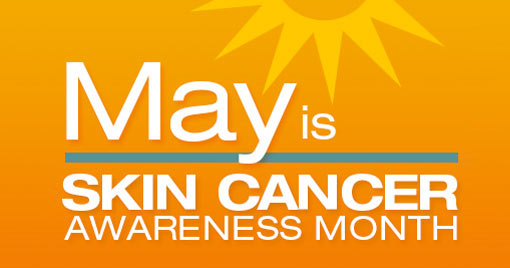 Most of us are so comfortable in our own skin that we forget we’re encased, head-to-toe, in the body’s largest organ. Like other organs, the skin is susceptible to injury and disease; its largest threat is cancer. Although most skin cancers are treatable if diagnosed early, the risk is constant and ongoing.

The month of May beckons us into the sunshine, a reminder that beach days and barbeques are near. May is also when the Skin Foundation of America urges us to reflect on our skin, during the summer and all year.

Ninety percent of all skin cancers are caused by rays absorbed from the sun. The damage they cause is cumulative, so long-forgotten sunburns from earlier days can bring future worries.

How Does Sun Exposure Cause Cancer?

The sun emits an entire spectrum of light. At one end are long, infrared rays that produce the heat we feel, even though we don’t see them. At the opposite end of the spectrum are the shortest rays, Ultraviolet A and B, which we neither see nor feel, and they’re dangerous even on cloudy days.

Ultraviolet A radiation (UVA) accounts for 95% of the ultraviolet rays that reach us. UVA penetrates deeply into our skin, damaging collagen and elastin and promoting wrinkles and premature aging. UVA damage is what causes tanning.

Ultraviolet B radiation (UVB) accounts for the other 5% of ultraviolet rays we absorb. UVB is the source of the skin’s production of Vitamin D. It doesn’t penetrate as deeply as UVA, but UVB radiation causes burning on the top layers of the skin and damages DNA in skin cells. These changes to the DNA lead to skin cancer.

The Most Prevalent Skin Cancers

Knowing the warning signs of the most common types of skin cancer can help us detect them early, when they’re most treatable. The three most common forms are:

Melanoma originates in the melanocytes, or pigment-producing cells of the skin. It can have a genetic component, so those having  a first-degree relative with the disease are at higher risk. It is not limited to people with whose skin can sunburn, and intense, occasional sun exposure can trigger melanoma.

Early detection of Melanoma is crucial. The Skin Cancer Foundation recommends examining your skin every month for new moles, or changes in existing ones, using the ABCDE method.

Because the majority of skin cancers are caused by sun damage, sun protection is key to prevention. Many formulations of chemical sunscreens protect against both UVA and UVB rays, but sunscreen is not a foolproof barrier to UV rays. No matter how high the SPF number, sunscreen alone cannot ensure protection against cancer-causing UV radiation. It must be applied in generous amounts, and regularly reapplied. Sunscreen can give people a false sense of security, prompting them to stay in the sun far longer than is healthy.

Equally important elements of protection include limiting sun exposure when radiation is most intense (between 10 a.m. and 4 p.m.); wearing UV sunglasses and a hat with a wide brim that shades your face, ears, and neck; covering exposed skin with clothing; and seeking shade during the sun’s most intense hours.

More skin-saving strategies and detailed information about skin cancer detection and treatment is available at the Skin Cancer Foundation.

This month, and every month, remember that the skin you’re in must last a lifetime.