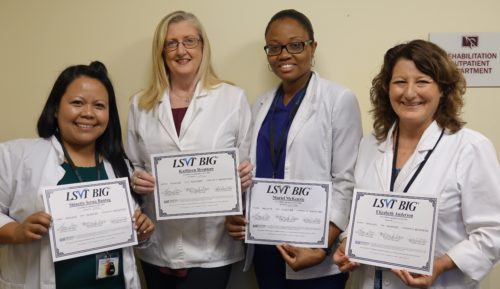 LSVT Global originated in 2003 as the Lee Silverman Voice Therapy, designed to help those with Parkinson’s disease improve vocal projection. That protocol is now called LSVT LOUD. The scope of the organization’s work expanded to help people improve their movements with LSVT BIG.

Rehabilitation for Parkinson's Patients at The Osborn

“Patients with Parkinson’s and related neurological disorders experience a diminished perception of their own sounds and movements,” explained Rob D’Elia, MSPT, MHA, The Osborn’s Director of Rehabilitation. “This work involves re-modulating how the brain experiences these activities and instilling patterns that enable patients to move and speak more effectively.”

LSVT BIG and LSVT LOUD are available at The Osborn Rehabilitation Center on an outpatient basis with a doctor’s prescription. The treatment typically takes four weeks and is covered by Medicare. To schedule an appointment, call Loria Coore at 914-925-8261. For more information about rehabilitation at The Osborn, click here.